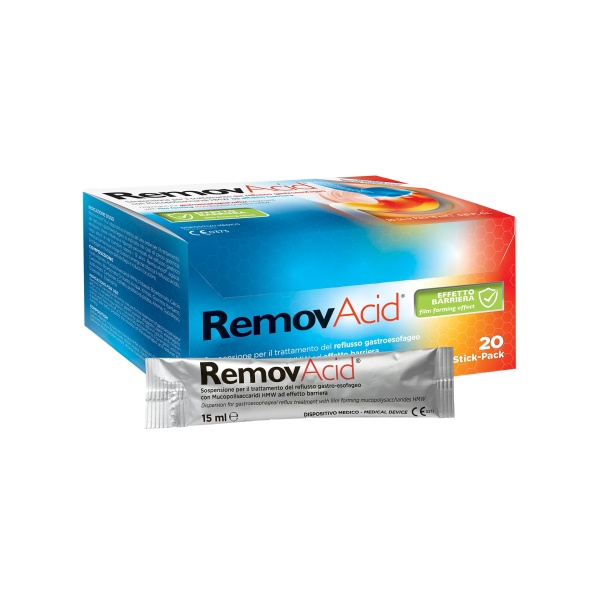 Medical device for oral use for the treatment of acid reflux diseases. It has a protective barrier effect against gastric reflux to reduce symptoms such as esophagitis, acid reflux, and gastric heartburn.
The natural-based formulation is based on alginates and carbonate salts that work in synergy with a patented blend with prickly pear extract rich in polysaccharides and potato extract. It acts mechanically, thanks to the barrier action of sodium alginate, HMW mucopolysaccharides and the carbonates contained therein.

Medical device for the treatment of gastroesophageal reflux; it is indicated in cases of gastric heartburn, esophagitis, irritative cough and regurgitation caused by gastric reflux in adults and children over 12 years. It acts mechanically, thanks to the barrier action of sodium alginate, of HMW mucopolysaccharides and of the carbonates contained therein.

In contact with the stomach, these ingredients react and they form a gel, while the carbonates release carbon dioxide allowing the gel to float and form a stopper that mechanically prevents the flow of gastric juice from rising towards the esophagus.

The viscosity of the syrupy form allows a uniform distribution over the gastroesophageal area in order to allow the ingredients to perform the mucoadhesive functionality and favor the contact of the substances with protective action on the irritated mucous membranes.

One 15 ml stickpack after main meals and at bedtime or according to your doctor's advice. Shake well before use.